What the South Dakota v. Wayfair Case Means for your E-Commerce Business 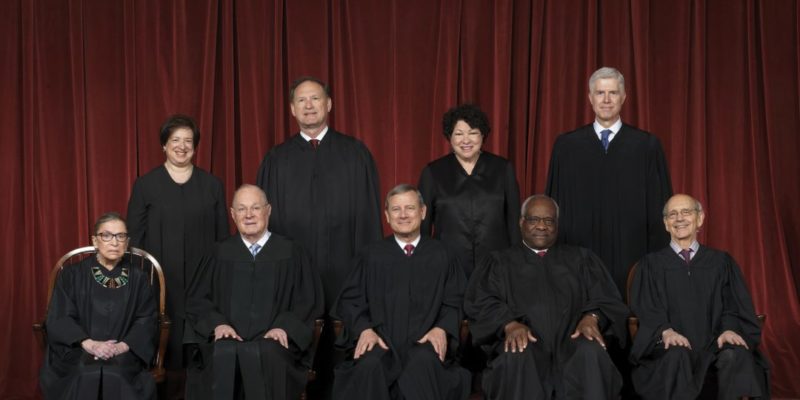 The Supreme Court issued a landmark decision on 6/21/18 in South Dakota v. Wayfair, INC siding with the State and overruling two prior Court decisions (Quill & Hess) to redefine what constitutes “nexus” in a given state.  This has huge future implications for e-commerce sellers and we want to unpack this landmark decision for you.

Short on Time? Skip to the Summary!

So What Is South Dakota v. Wayfair, INC?

Let’s start with a summary of the case and its core arguments. When consumers make purchases, the consumer’s states often impose a sales tax. This case requires the Court to determine when an out-of-state seller can be required to collect and remit that tax. All justices agree that taxing e-commerce sales is lawful and constitutional. The question is whether a previously held rule called the physical presence rule is a valid test for either including or excluding sellers from a given state’s tax law.

What is The Physical Presence Rule?

According to the old Quill ruling, a state only had the right to require sales tax compliance IF a company had a “significant physical presence” in the state. The court had defined “significant” as a company having a location, employees or inventory housed in that state. For e-commerce sellers, this was great news and created an advantage. It meant we only had to worry about collecting and remitting sales tax in states where we literally had a physical location.

Amazon FBA complicated things since Amazon moves inventory to any of its fulfillment centers across a growing number of states, therefore, giving a seller nexus in those states. Amazon’s extra confusion meant that sellers were at most on the hook for the 26 states where Amazon had an FC. Sellers had a hard time determining whether to file in a particular state and recent MA, PA and WA rulings have made this risk management decision even harder.

Back to South Dakota v. Wayfair, INC: It is impractical to collect a use tax from each citizen and the result of non-compliance is estimated to cost the states between $8-33 Billion a year(the Court opinion cited multiple studies). In response, South Dakota enacted a law in 2016 to try to correct this issue by asserting authority to require all sellers who sell into their state above a minimum line to collect and remit sales tax regardless of whether they have a physical presence in SD.

When Wayfair and other large sellers Overstock and Newegg decided not to comply with the new law South Dakota filed suit. The defendants asked for a summary judgment thus combining their cases into this one case, South Dakota v. Wayfair, INC. The lower courts sided with the companies against the state because of the precedent established by Quill and Hess (the 2 prior landmark Supreme court cases).

The Supreme Court decided to weigh in on the case and heard arguments in April of 2018 and have now issued an opinion on 6/21/18.

What Was The Supreme Court Opinion?

The Justices ruled 5 to 4 in favor of the states. In Kennedy’s words: “Held: Because the physical presence rule of Quill is unsound and incorrect, Quill Corp. v. North Dakota & National Bellas Hess v. Dept of Revenue of Illinois ARE OVERRULED.” Check out the actual 40 page Supreme Court Opinion here.

What Does This Mean?

The South Dakota v. Wayfair, INC opinion means that the physical presence rule no longer applies and that the states have the right to enforce sales tax laws on any seller above a “reasonable” minimum regardless of whether that seller has any physical presence.

In an effort to protect small sellers and startups, South Dakota established minimums of $100,000 per year in revenue OR 200 distinct transactions. This means any seller who doesn’t sell at least these minimums into South Dakota in a year is exempt from collecting sales tax. Since the population of South Dakota is very small these minimums will likely exempt almost all out-of-state sellers who sell less than $10,000,000 per year unless their products are particularly popular in SD.

Is This Good News or Bad News?

We aren’t 100% sure yet if this is good news or bad news for 3rd party sellers because this ruling doesn’t at all address whether marketplaces like Amazon should have to collect taxes for its 3rd party sellers.

This is a major question that South Dakota v. Wayfair, INC doesn’t settle. Will Amazon respond by using its existing sales tax infrastructure to make this compliance headache disappear from the plates of millions of 3rd party sellers? Although this ruling doesn’t address platforms like Amazon it does appear to be one more logical step down the path toward Amazon owning the sales tax problem for its sellers.

Since this ruling most directly gives states the right to create and enforce sales tax legislation against sellers without addressing Amazon things may get more complicated before they get a lot easier. In other words, unless Amazon voluntarily steps up to the plate many sellers who have ONLY had to file in the fulfillment center states may now have to file in additional states since physical presence isn’t required any longer.

Although the fate of Amazon and its sellers is somewhat up in the air this is definitely bad news for Wayfair, eBay, Newegg and other large sellers and marketplaces who aren’t already collecting and remitting sales tax. These companies took pretty strong stock price hits when this ruling came out on Thursday as you can see on the following chart via Bloomberg: 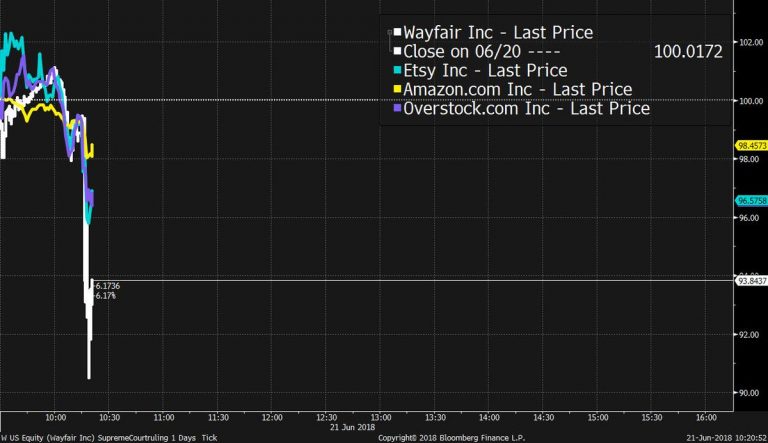 Amazon suffered the least because the effect on Amazon and its 3rd party sellers remains to be seen. Just as importantly Amazon is already collecting sales tax in all required states on products that Amazon directly sells and Amazon already collects and pays sales tax on behalf of 3rd party sellers in two states (Washington and Pennsylvania). This means that Amazon has the infrastructure to make a move and has already proven in WA and PA that sales won’t be radically harmed by adding sales tax.

If this trend held true for all states then only sellers selling more than $25,000,000 a year would even need to worry about sales tax in most states. Our suspicion is that states like California that have a much stronger appetite for regulation won’t be nearly as generous as South Dakota has been. So don’t expect the final outcome to be this rosy but our guess is that states will compromise depending on the political climates and that most of the newly taxed sellers will be 8-figure sellers. If we are correct then this is great news for 95% of all e-commerce sellers. Oddly enough this is also great news for large traditional retailers like Target, Walmart, Best Buy, etc… who already had to pay sales tax in all states that have one.

What Should I Do Now?

Second, It is critical to stay on top of where you sell your products to and to stay up to date as states enact new sales tax laws over the next 12-18 months. Make sure your accounting and compliance partners really understand the ins and outs of this evolving landscape. Our accounting clients have had a good experience with TaxJar as a sales tax filing software. If you don’t have a good software partner check them out.