What Amazon Sellers Need to Know about Sales Tax Today 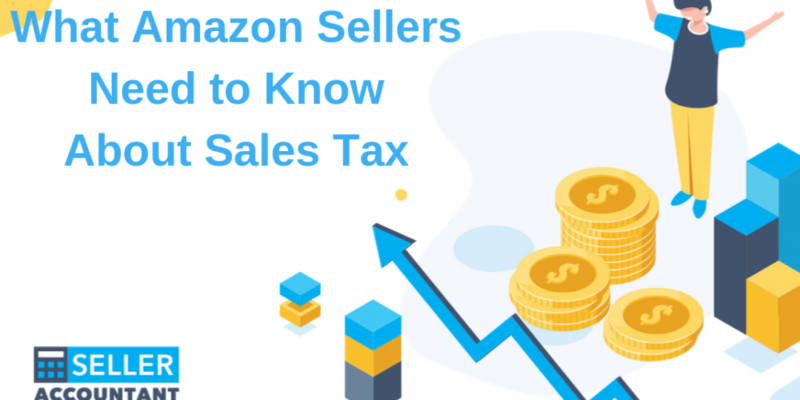 These days, Amazon sellers are scratching their heads trying to figure out from which customers they should collect sales tax. An online seller who thought they had a handle on sales tax even two years ago, will find that the entire sales tax landscape has changed.

What happened? And more importantly, if you sell online, in what states and from which customers should you be collecting sales tax?

Sales Tax from the Dawn of E-Commerce to 2018

How online sellers were required to collect sales tax didn’t change much from the first sale on eBay until right around 2018.

Why am I giving you a history lesson? Bear with me. It’s important to know how we got here, especially if you haven’t updated your sales tax strategy over the past couple of years!

It’s also vital to note that, then and now, individual U.S. states are allowed to make their own tax laws, but how states interact with one another is overseen by the U.S. government. From the beginning of e-commerce as a concept to just last year in 2018, any retailer (online or offline) was only required to collect sales tax in states where they had some sort of physical presence. A retailer had nexus, as described in the 1992 Supreme Court ruling Quill v. North Dakota, when they had a location, employee, inventory, or other “significant presence” in a state.

When Fulfillment by Amazon arrived on the scene, many online sellers, including Jess, began embracing this new business model. However, remember that “inventory” in a state creates nexus? Suddenly, a seller like Jess found that Amazon was storing her inventory in six, seven or even twenty states. And then she was required to register for sales tax permits and collect sales tax from buyers in all of those states.

To sum it up, until 2018, online sellers were required to collect sales tax from buyers in states where the online seller had some type of physical or “significant” presence.

But that was all about to change.

What do state tax collectors want? If you said “more taxes” then congrats, you weren’t born yesterday. As e-commerce continued to grow year over year, and tax collectors saw more and more UPS trucks and Amazon vans sailing along their streets, they realized that the precedent set by the Quill v. North Dakota Supreme Court case allowed, in their opinion, a “loophole” for online sellers.

To these state tax collectors, online sellers were selling to customers in their states, but since they were not technically required to collect sales tax from buyers in the state, then an awful lot of commerce was literally passing under their noses untaxed. And they couldn’t have that. (However, let’s look at this from the tax collector’s point of view, too. State governments use sales tax money to pay for schools, roads, fire departments and other budget items, and they were seeing a decrease in sales tax revenues across the board as more and more commerce moved online.)

States got together to send a brand-new case to the Supreme Court to challenge the precedent set by Quill v. North Dakota. States claimed that, to be fair to them and to non-e-commerce retailers in their states, online sellers whose sales exceed a certain sales or transaction threshold in their state should also be required to collect sales tax. They called this new type of nexus “economic nexus.”

The Supreme Court handed down their decision in this new case, Wayfair v. South Dakota, back in June of 2018. Long story short, the Supreme Court agreed with the states. Now, online sellers – even if they have no location, employee, inventory, etc. in a state are required to collect sales tax in many states if they exceed a certain sales or transaction threshold in those states.

This means that, these days, more online sellers than ever are required to register for sales tax permits and collect sales tax from buyers in other states.

Think of economic nexus as just another type of sales tax nexus. But in this case, states are allowed to set a threshold – generally about $100,000 or 200 transactions per year – and if an e-commerce seller’s sales exceed that threshold they are now required by the state to register for a sales tax permit and collect sales tax from all buyers in that state.

Let’s go back to our eBay and Amazon seller, Jess, who since we last met her has entered the surprisingly lucrative snow shovel market. Jess has a lot of customers in chilly Minnesota, and that state has an economic nexus law (in effect October 1, 2019). The Minnesota economic nexus law states that any seller whose sales to Minnesota buyers exceed $100,000 in the past twelve months, or any seller who makes more than 200 sales transactions to buyers in the state in the past twelve months, is now required to register for a Minnesota sales tax permit and collect Minnesota sales tax from all Minnesota customers.

Jess made over $140,000 in sales over the last twelve months just to buyers in Minnesota. Despite having no physical presence in the Land of 10,000 Lakes, and no snow shovels sitting in an Amazon warehouse in the state, Jess is now required to register for a Minnesota sales tax permit and collect sales tax from all of her Minnesota customers because she exceeds Minnesota’s economic nexus threshold. The same would be true if she made more than 200 separate transactions to Minnesota buyers in the past twelve months (even if she didn’t make more than $100,000 in sales).

But wait, there’s more. Two states, Oklahoma and Rhode Island, have enacted an alternate type of sales tax law. Rather than setting economic nexus thresholds, they have enacted “notice and report laws.” While these laws do not explicitly require online sellers to collect sales tax if they exceed a certain threshold, they do require online sellers who exceed certain thresholds to send notices to their buyers each year AND to report their buyers to the buyers’ home state taxing authority. The notices tell the buyers that since the retailer neglected to collect sales tax on their transaction that the buyer owes “consumer use tax” to the state out of their own pockets.

Though states wouldn’t admit it outright, the intention of these laws is to make not collecting sales tax so burdensome that the retailer gives in and collect sales tax rather than bothering their customers with annual notices scolding them about sales tax.

When they weren’t passing economic nexus laws to try and land big e-commerce fish in their sales tax nets, states were also trying to persuade online marketplaces like Amazon, eBay, Etsy and Walmart to step up and collect sales tax on behalf of sellers who sell on their platform. This makes it easier for both states and platform sellers to handle sales tax. States get one big sales tax check from the platform, and sellers don’t have to worry about tallying up the sales tax they’ve collected in that state and filing it on a sales tax return.

About thirty states now have a law that requires marketplaces to collect sales tax on behalf of their sellers.

This is mostly great news for online sellers! But with caveats.

Caveat #1 – Sellers May Still be Required to Collect Sales Tax

The platform only collects sales tax on sales through that individual platform. For example, say Jess sells on Amazon and through her own online store powered by Shopify. While Amazon will collect Washington state sales tax on all of Jess’s Amazon sales, they do not collect sales tax on the sales she makes through her Shopify store. The same goes for any other sales she makes, such as at a retail store, at craft fairs, or on other online venues that aren’t subject to the state’s marketplace facilitator laws.

So, if Jess has sales tax nexus in Washington – say she now lives there, has a location or employee there, or has economic nexus there, she is still required to register for a Washington sales tax permit, collect sales tax and file sales tax returns in Washington. She now just doesn’t have to handle sales tax collected via Amazon or the other marketplaces subject to Washington’s marketplace facilitator law.

Though it varies by states, most (if not all) states with marketplace facilitator laws still require online sellers to file a sales tax return even if the only sales tax collected on their behalf was by a marketplace.

Though Amazon sellers may still be required to deal with sales tax requirements, marketplace facilitator laws make it relatively easier for many Amazon-only sellers to report sales tax, because the actual sales tax collected is all handled by the marketplace.

For online sellers, the sales tax landscape has changed significantly in the past two years.

If you are an Amazon-Only Seller

Some sellers who solely sell on platforms like Amazon or eBay now have an easier time with sales tax. They are only required to sit back and watch the marketplace collect sales tax on their behalf in many states, though they will often still be required to file sales tax returns in states where they have sales tax nexus.

If you are a Multichannel or High Volume Seller

Most U.S. states now have an economic nexus law in place. Some of the final ones went into effect just recently on October 1, 2019. As an online seller, it’s up to you to keep up to date on these laws.

Not sure where you are required to collect sales tax? Our friends at TaxJar have up-to-date information about sales tax in every state. You can also take their Sales & Transaction Checker to determine if you have sales tax nexus in one of the states with economic nexus laws.

For more from us on sales tax:

Have questions about sales tax? Contact us for a free consultation!