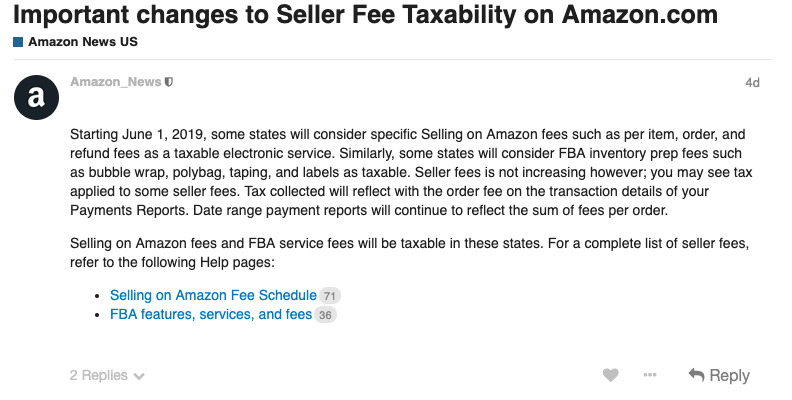 Amazon is being forced by some states to start charging sellers sales tax. This only affects certain services and only if you or your inventory are located in certain states.

Amazon’s initial email created unnecessary confusion but they’ve clarified the response quite a bit. Below is my take on the new Seller Fee tax policy.

Do I need to worry about Seller Fee Taxability?

It depends on where you are and where your FBA inventory is.

In other words, this new policy won’t have a huge impact but if you live in the states listed in #1 above you may need to gear up to raise your prices by 1% to maintain margins. If you don’t live in one of those states then congrats because you now have a 1% advantage over your competitors who are physically located in those 5 states. I believe the FBA side of things will impact almost all sellers but by such a tiny percentage that you won’t notice it.

Does this create a compliance burden for sellers?

To be clear, Sellers are not going to be required to collect or remit any additional sales tax but some Amazon fees will become more expensive in certain states.

Is This An Example of Double-Taxation?

Some are already arguing that the states are overstepping by requiring sales tax collection on units that are still “in production”. Normally, only the end consumer of a product has to pay sales tax on products and the various players in the supply chain do not. But does this new Seller Fee Tax qualify as double-taxation?

The answer is maybe but I don’t believe there is a strong enough constitutional argument for the legislature to change this anytime soon. I also doubt that sellers will be harmed enough to push a case to the Supreme Court meaning this new ruling is likely here to stay.

It would literally take a billion-dollar company located in one of the target states suing that state for damages and the courts siding with the corporation in order to change this ruling. I believe this is unlikely at least for several years. 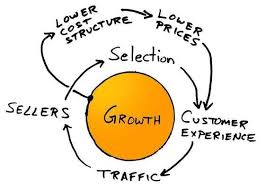 Not at all! Amazon has just inherited an additional compliance burden, new reporting needs for Merchants AND this slows the Amazon Flywheel by making increasing the costs to Sellers and ultimately buyers.

Don’t get me wrong. Amazon loves charging fees when they get to keep those fees but a law that potentially will require sellers like us to raise our prices by 1% without Amazon getting a cut: Nope Amazon hates that!

Bottom Line: What Impact will new seller fee taxability have on average sellers?

Most Sellers will be impacted by the FBA portion of this. But the impact will be relatively small. I provide outsourced CFO services for sellers and the idea of losing even one profit percentage point makes me nauseous but I believe the initial fears were outsized.

However, just to reiterate, if your entity is located in Connecticut, DC, Hawaii, South Dakota or West Virginia then make sure your profit calculations include an Amazon commision of 16% instead of 15% (or just add a point to whatever the commission is in you category).

As I learn more from Amazon I’ll continue to post. Help me out if you have links to articles especially from Amazon that give us more clarity on this new Sales Tax for Seller Fees.