Generation Z: Get Inside the Mind of your Consumers 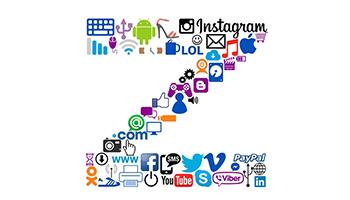 What if I told you that by 2020 a new age of consumerism will be upon us? Generation Z is starting to enter the workplace with greater spending habits than ever before. The second youngest generation is between 1996-2010 and takes up 25% of the U.S. population. The Z’s are known to be the first “digital age” generation, not being very familiar with a walkman but were the first kids to use a smartphone. With the exponential growth of technology, the “iGeneration” has grown increasingly dependent on the convenience of online shopping. I, myself, am apart of the generation being born in 1997. In this article, I will not only talk about the generation as a whole but bring some personal experience to the table as well.

In two years, Generation Z will take over 40% of the consumers on the market. If that doesn’t shout money to your fledgling business, then the $44 billion a year in consumer spending will. To add onto this mouth-watering statistic, this number is before most of the generation grows old enough to take a solid foothold in a workplace and begin purchasing “adult items”–houses, health care, and much more. Now that we have established the fact that this generation loves to spend, the question is how do they spend it?

A stark difference between the past two generations and Generation Z is that there is a substantial desire for in-store shopping. About 3/5ths of Gen Z prefer shopping in-store shopping and spend a third of their time online shopping (seen below). Another survey stated that 74% of Millenials make at least one online purchase a month, while Gen Z drops to only 49%. This trend is seen in the latest generation’s desire for authenticity and a distrust for most online activities. Gen Z does not want to feel like they are giving their money to some foreign entity or a corporate giant but want an authentic experience every time they shop. Companies that tailor to the younger generation’s desire for a real experience have seen a dramatic boost in sales. 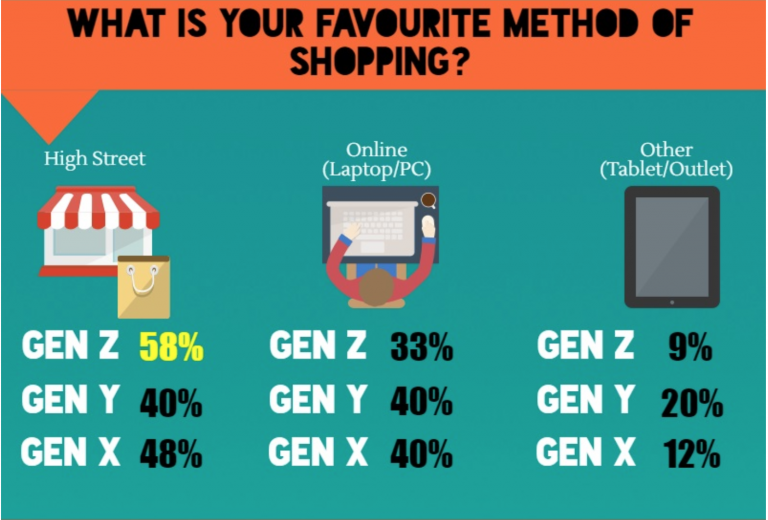 I’ve got some good news and bad news for E-vendors. I will start with the bad news: this generation is pickier than ever. With the ability to look at reviews online, ask their friends, and find out everything about a business in seconds, the iGeneration has made it difficult for online vendors to acquire new customers. To add onto this, garnering their attention has become even harder. Millenials caused marketers a problem with a 12-second attention span, but Gen Z has cut that time down to 8-seconds. The good news? Generation Z shoppers are basically free advertisement. If companies offer a proper social media experience for their clients, Gen Z will not hesitate to share this on to the rest of their followers. At the same time, the generation is most likely to purchase an item that a friend or social media influencer recommended–causing a potential full circle straight back to the wallet of your business.

I personally prefer shopping online, but like most people in my generation, I use multiple channels before I make a purchase. I read blog posts/reviews online, check the product out in-store, then scour the internet to find the best price. Multi-channel shopping has only just begun and will only expand–offering more potential outlets as time goes on. In a few years, a single market business will no longer be able to compete with their multi-channel competitors. Although, it is important to not spread your business too thin by trying to establish yourself in too many markets; take an imperialistic approach to your business and become the Napoleon of E-Commerce–conquer one market then move onto the next. If done correctly, one will not only see an increase in revenue but have a much stronger business portfolio.

In a year or two alone, ads have begun to take over a once ad-free social media platforms. Marketers have realized Generation Z hate clear-cut advertisement and links; a research showed that only 25% of the new generation like online search ads. Instead, the generation looks at key influencers before making their purchases. Social media models and celebrities often make six-figure revenues at the age of 16-24. Teenagers are posting pictures/videos online and making more than the average adult–a true phenomenon.

YouTube has grown to become the greatest brand marketing tool for businesses. YouTube stars with hundreds to thousands of subscribers regularly post videos on product reviews–some sponsored and others not. If a product is sponsored, a business pays a vlogger for a promotion or “shoutout” to endorse their products. While, on the other side, vloggers could go out and purchase your product and give an unbiased opinion on it–either positive or negative. Products with high reviews from social media celebrities will become staples in a growing market while others will fall behind their competitors solely off what a 20-year-old said.

As a current college student, I have seen companies start a small-scale ad takeover of personal accounts. Lyft contacted a few of my friends and offered to pay ~$500 for only three posts on Instagram. Girls with 15k+ followers post 4 times a week that contain #ad for small boutiques to corporate retail giants. The latest social media trend is small online stores creating a list of guidelines to become a “brand ambassador”; if a person meets the “guidelines”, they’ll receive free products from that company to post and sell on social media. Here is an example from an e-boutique, Primp: 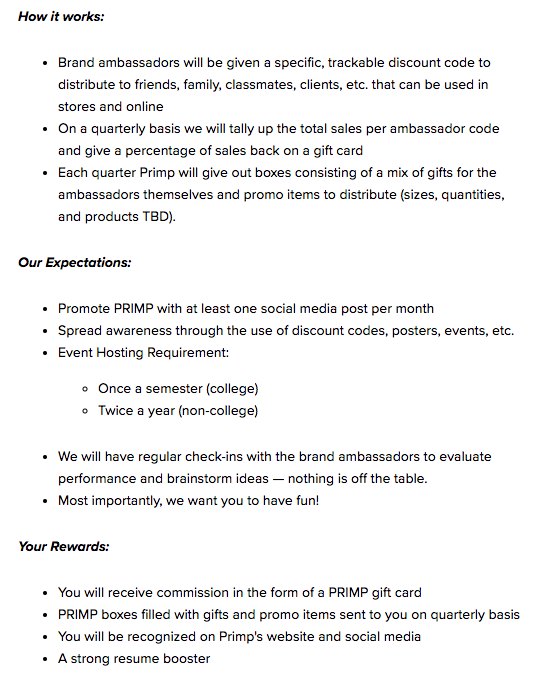 A new age of advertising is taking shape and it is sending traditional marketers a massive headache. TV ads are not reaching people as they use to. Radio ads have become primitive. Data misuse and spam advertisement are the seen as the plague. Reaching the younger markets is like trying to sell to aliens–everything that worked in the past no longer works. This is only natural and happens every time a new generation begins to take hold of the market.  Instead of trying to weather the storm, it is important to take advantage of the opportunity and sail into the wind.

We stress to get on top of trends sooner rather than later. Sellers in 2010 were having to play catch-up to millennials because they were to busy focusing on past market trends. In contrast, sellers that caught onto the upcoming generation early on have now become major giants in their markets. In 2006, American Eagle founded a new women’s’ underwear line Aerie–demoting airbrushing and photoshop while promoting positive body behaviors. This was one of the first companies to appeal to the authenticity of products for the upcoming generations. It took time but the line has become one of the most successful in the industry. On the opposite end of the spectrum, Victoria Secret hasn’t updated their strategies and, in turn, saw a decline in sales every month in 2017. If you’re an online seller and not seriously considering the future of the markets, then you’re not seriously considering the future of your business.

Tune in next week for our part two on the Generation Z series! We will discuss how to create a better brand/portfolio for a potential company acquisition using the information above!